No rest for the dead

A survey of the city's historically significant burial sites

While announcing the Karachi Metropolitan Corporation's budget for fiscal year, 2018-2019, Mayor Waseem Akhtar last month promised to construct two graveyards in each district, besides a model graveyard in Surjani Town. It remains to be seen whether the deceased of Karachi will get to rest in these planned abodes. What is certain is that for now, dying is as much a hassle for Karachiites as living.

As the population increases and urban land dwindles, Karachi's residents - both living and deceased - are faced with a shortage of land. With spaces in graveyards already running out, several burial sites have also been taken over through China cutting.

The sight of residential structures built in cemeteries may be eerie, but they are not uncommon. The situation has created an opportunity for grave diggers to rent out space in closed graveyards in return for an exorbitant fee. Cemetery workers are reportedly charging between Rs10,000 and Rs15,000 for a grave.

Rs2,500 is supposed to be charged for a single grave at a graveyard as per the Karachi Metropolitan Corporation (KMC). However, opportunists continue to take bribes to create space in KMC graveyards that have been closed for burial. Contractors have popped up in many of the larger graveyards of the city. Grave diggers at such cemeteries have created territories and blocks. Each block holder has his own price list for construction, renovation and maintenance of graves.

Contractors at the Sakhi Hasan graveyard are charging up to Rs25,000 for a single grave, which is 10 times the actual amount. The graveyard was closed after it reached full capacity, but contractors are now making new graves on top of old ones and charging heavy bribes for the task.  Graveyards located in posh areas, including the Society Graveyard, have become a hub of profiteering for cemetery contractors and workers who have been charging up to Rs50,000 for a single grave. The Society Graveyard continues to be used as a burial site despite having reached full capacity.

According to cemetery workers, graves that are not visited for extended periods are cleared to make space for new burials. "Grave diggers identify which graves are not visited during Eid, Shab-e-Barat and on other occasions," said sources, adding that graves that do not have headstones are often used to bury multiple bodies, leading to clashes between bereaved families. The reuse of graves is a business run year-round. Graves closer to entry points to the graveyards are sold at higher rates while those further from the entrances are relatively cheaper.

A number of old and closed graveyards in the city are being used as dens by drug addicts. Deserted cemeteries create a space for narcotic dealers to sell drugs while addicts use the space as a safe haven. Drug peddlers have a fixed spot in the graveyards while the police turn a blind eye. The land mafia continues to reign supreme in many old graveyards of the city. In Mangophir, an ancient burial site near the shrine of Sakhi Sultan Baba has been encroached upon by the land mafia. The encroachers bulldozed centuries-old graves and built illegal structures in their place.

In addition to graveyards, the mafia has not even spared the hilly lands of Mangophir. Several graves with beautiful calligraphy of Quranic verses have also been destroyed. This graveyard is of historical significance as it dates back to the eighth century when Muhammad bin Qasim invaded Sindh.

Burial structures with such artistry are also seen in the Thatta, Makli and Chawkandi graveyards.

The headstones of the graves of men depict images of crossed swords with the kalma written on it. The graves of women have images of delicate bangles and earrings carved into them.

The land mafia has bulldozed a large part of the graveyard and created space for makeshift homes and huts.

Prominent residents of the area, including Haji Allah Baksh and Alam Khan, were laid to rest in this graveyard about 250 years ago. Graves spreading over three acres can be found near the warm water springs and shrine of Mangophir. The date palm farms, ancient graveyard and playground are archaeological sites that come under the directorate-general of archaeology and antiquities, according to which it owns 17 acres in Mangophir. The area has seven different date palm farms planted on 12 acres, according to the archaeology department. The land has been encroached upon by the land mafia, which is selling it off for the construction of buildings, housing schemes and commercial projects.

Mewashah Graveyard is one of the largest and most historically significant graveyards in the world. There are many graves in the graveyard that date back to the 17th century. The area, located alongside the Lyari River, is named after sufi saint Hazrat Mewashah Baba. The graveyard is spread over 1,000 acres.

Mewashah is connected to Garden from one corner and Shershah from the other. Earlier, the graveyard used to spread over 2,000 acres.

The Mewashah Graveyard is certainly the most unique graveyard in Pakistan as people of different religions are buried there. It houses the graves of Muslim, Christians, Hindus and Jews.

It is also home to the last resting place of Qadir Baksh alias Qado Makrani, who in the 18th century waged a war against the British government and gave them a tough time. The British government hanged him at Central Jail, Karachi. The graveyard also has the grave of Ghazi Abdul Qayyum Shaheed who was hanged in 1935 on charges of assassinating a Hindu blasphemer, Natho Ram.

A piece of history

On the National Highway in Karachi are the 500-year-old Chawkandi Tombs. The graveyard has been declared a world heritage site by the United Nations Educational, Scientific and Cultural Organisation. Spread over 2.5 kilometres of land, it is partly famous for being the burial site of Muhammad Bin Qasim's soldiers, who invaded Sindh in 710.

However, according to historians, the graves thought to be of Bin Qasim and his cohorts actually belong to Baloch tribal leaders who were buried here in the 16th century. The architecture and structure of the graves is similar to the Makli Necropolis and the graves in Sateen Jo Daro in Rohri.

A number of legends and myths are associated with the tombs, which include the graves of members of the Jokhio and Baloch tribes. The term Chawkandi means four corners.

All the tombs were constructed with yellow sandstone from Jung Shahi in Thatta. The endurance of the stones can be gauged by the fact that despite the passage of 600 years, these graves have withstood the test of weather and still stand in place.

Many tombs have designs engraved in them, of birds and flowers and crowns resembling those of the Egyptian pharaohs. Some of the graves have big domes, indicating that the graves belong to some important personages. Some graves are engraved with images of sword fighting, horse riding and weapons. On the graves of women, jewel patterns have been engraved. Some graves have been made on raised platforms while others have niches. On some women's graves, palanquins and funeral cradles are made, indicating that they were wealthy and married.

One of the graveyard caretakers related a tale of an English man who once took a stone and a drawing of a grave with him and made it a part of his collection but as soon as he took the stone away, he was beset with calamities. He then contacted a saint and on his advice sent the stone back to Karachi.

The Bagh Wadi Hussain Graveyard of the Shia community is situated 2km away from the Karachi-Hyderabad toll plaza on the Superhighway where relatives of those buried there can offer Fateha for their deceased via the internet. With its digital identity facility, this relatively new graveyard is one of the most unique graveyards in Pakistan.

Every grave in this graveyard has been allotted a number, which is then given to the family of the deceased. If anyone who was not present at the time of the burial wants to see the grave of a friend or a relative, then they can do so using the graveyard's official website where they have to search the grave number.

Bagh Wadi Hussain is a well-planned graveyard where graves are lined in a row with pathways on either side. Even if a row has more than 100 graves, the dimensions of each grave remain the same. Each grave is 6.5 feet long and the width is also uniform.

The grave markers on each grave are also of the same size. The tiles are the same colour and the font used on the graves, as well as the verses inscribed are also the same.

Those who come to the graveyard during the burial process are provided facilities such as water and light. The graveyard also has a prayer room and a washing area.

The port city once had a thriving Jewish population but over the years traces of the Jewish community disappeared from Karachi. One of the only things remaining is a burial site.

The Mewashah Graveyard has a dedicated section housing a large number of Jewish graves but due to poor maintenance, these graves are decaying and disappearing. The site is also known as the Bani Israel Graveyard with many graves inscribed with Hebrew calligraphy.

Cemetery workers claim that they have been taking care of the site for the past 200 years and have spent years ensuring that the graves remain intact. A large number of the graves date back to 18th and 19th centuries. The last burial took place in this graveyard as recently as in the 1980s.

Many of the graves are works of art - they boast marble carvings and elaborate structures. Some are even enclosed in marble tombs. 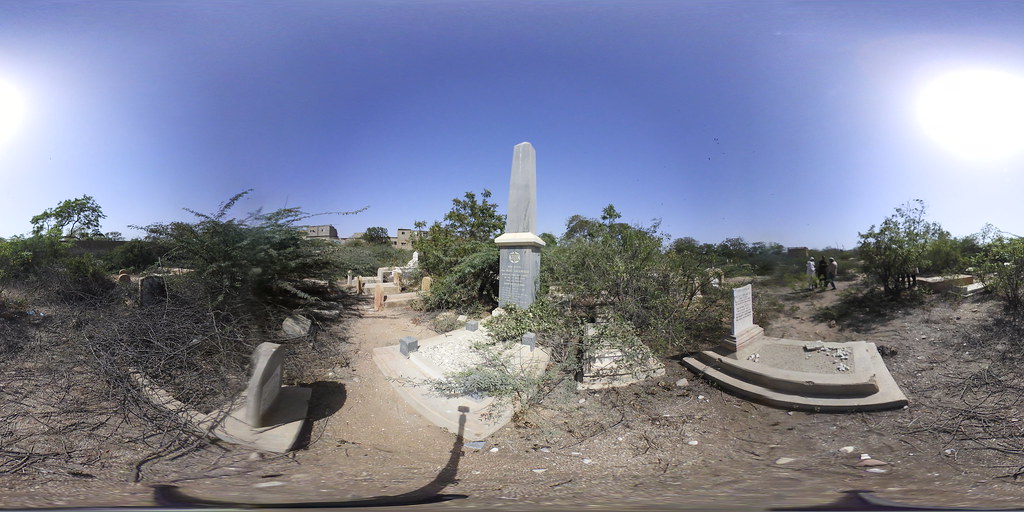 Also buried in this graveyard are Solomon David and his wife Sheola Bai. They established the first and last place of worship for Jews in the city - the Shalom Synagogue. David was an employee of the Karachi municipality who died in 1902. A year later his wife passed away and both graves are enclosed in a tomb.

The graveyard is located on a vast expanse of land where there is still space for more graves. The current number of graves is in the hundreds.

The area remains a hideout of gangsters and of drug dealers. The caretakers do not allow unknown persons to enter the graveyard and also stop people from taking pictures, due to which most people do not bother to even glance in.

Another part of the city's history is tied to Gora Qabristan, located at the intersection of Korangi Road and Sharae Faisal. The cemetery has hundreds of graves of Englishmen along with local members of the Christian community.

This cemetery was established in 1845, during the peak of the British rule, which is why it is called Gora Qabristan. It is not known when the first person was buried here but the oldest grave dates back to 1885.

Elaborate graves dating back to 1887 and 1891 are also present at the cemetery, constructed using expensive stone. It is also home to a large number of British soldiers' graves. When Germany attacked Poland during World War II, 30,000 Polish citizens took refuge in Karachi between 1942 and 1945. They were kept in temporary camps established on Country Club Road, now known as University Road, and in Malir. During this time, 58 polish citizens died and were buried in this graveyard. In 2005, the Polish Embassy established a memorial for its citizens and engraved details of the incident.

Also buried in the cemetery is Phyllis Louis Lawrence, wife of the then collector of Karachi, Sir Henry Stavely Lawrence. The date of death on the grave is July 30, 1912 and it is in a separate enclosure, similar to those constructed during the Mughal era. The couple had three children and Phyllis reportedly died in a road accident.